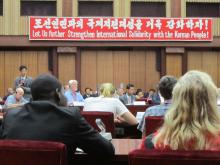 We, representatives of the organizations of friendship and solidarity with Korean people in different countries and international NGOs, address this letter to you after our gathering in Pyongyang, capital of DPRK, on the 16th of August 2017 in the hope that the UN will fulfill its due mission in the settlement of the Korean issue. In spite of the aspiration of humankind for peace, security and common prosperity of the world, the situation on the Korean Peninsula is getting extremely acute, arousing serious concern of the international community. The prevailing situation on the Korean Peninsula is due to the division of Korea, a product of the Cold War in the last century, and the constant intervention of the outside forces who seek nothing but their own interests.

The US, which is directly responsible for the division of Korea, answers the DPRK’s just proposal to replace the armistice agreement with a peace treaty to establish a durable peace mechanism with its annual war drills with the involvement of huge armed forces and state-of-the-art military hardware. The US also stands against the Korean people’s aspiration for peace and reunification, resorting to its anachronistic anti-DPRK hostile policy.

In spite of this fact, the US and its alliance make vicious attempts to shirk the responsibility for the worsening situation on the Korean Peninsula and go the length to usurp the name of UN for their despicable purpose to isolate and stifle the DPRK.

Unfortunately, however, the UN, duty-bound to regard respect and impartiality for sovereign states as its lifeline, is sympathetic to the US anti-DPRK hostile policy aimed at the overthrow of the system in the DPRK, its lawful member state and an independent state, far from condemning the US.

We unanimously recognize that the DPRK’s nuclear tests, satellite launches and test-fire of ballistic missiles, which are now used as pretexts for anti-DPRK “sanction resolutions”, belong to the sovereign state’s lawful right to self-defense, especially when the US is deploying the missile defense shield “THAAD” in order to obtain first strike option without response.

We also share the same understanding that any relevant international laws, including the UN Charter and the existing resolutions of the UNGA, have no provision at all that the nuclear test itself is a “threat to world peace and security”.

We are concerned about the fact that you and the UN Secretariat give no answer to the repeated request of the DPRK mission to the UN to explain the legal basis of the UNSC’s “sanction resolutions”.

This clearly shows that the UNSC’s anti-DPRK “sanction resolutions” are nothing but unlawful and illegitimate documents cooked up in pursuit of a certain political purpose to oppose a country and its people.

As we assume the mission to promote mutual understanding and friendship among people of different countries, we cannot remain indifferent to such approach as expressed by the recent UNSC resolution.

The sanctions imposed on the DPRK constitute an aggression and the violation of the principles of the founding chapter of UN.

During our stay in Pyongyang, we visited several places in DPR Korea and talked to many people only to notice that Korean people are the true peace-lovers of kind and beautiful hearts and also the brave ones who respect the righteous choice of people in different countries of the world and tolerate no injustice and aggression.

It is really regretful for us that indiscriminate and inhumane sanctions are inflicted upon such great people in the name of UN.

These severe sanctions on the DPRK unprecedented in history are a grave challenge to the people’s rights to survival and development and the acts against humanity and civilization to turn our world back into medieval darkness.

We urge Your Excellency UN Secretary General and the UN Secretariat to take appropriate measures, including lifting of sanctions against DPRK, true to the UN’s mission to pursue world peace and security and common development of mankind.

The Bridgetown Declaration from the 1st Caribbean Peace Conference

We are here to answer any question you may have about The Guyana Peace Council. We will respond as soon as we can.